The Superhero of European Graphite Recycling

The Superhero of European Graphite Recycling

Most days, you will find Anna Vanderbruggen in her research lab working with treacherous black mass as part of her revolutionary method to recycle graphite. (Black mass (pictured above) is the messy mixture of cobalt, nickel, lithium, and graphite left over during the recycling process).

It may not seem like the usual work of a superhero. However, the humble French geologist has earned superhero status in the world of battery recycling. Because for the first time, she is enabling recyclers to recover not only the valuable metals from used batteries – but also to recycle graphite. The technology can be directly implemented during the recycling process. It makes the process more sustainable, and also means there are two valuable products at the end of the process. Recyclers will have both the metal powder and the graphite powder – instead of just one.

Anna’s method reduces the carbon footprint associated with graphite mining and purifying, currently carried out in China for export to Europe. Using recycled graphite from old batteries in this way saves a huge amount of CO2 because the need for mining and intense purification is eliminated.

However, until Anna’s innovative solution, European recyclers did not have a cost-effective and planet-friendly way to recycle graphite from batteries. This is why Anna has earned the EIT RawMaterials nomination for the EIT Change Award, and has made it through to the finals of the EIT Awards on 11 October in Brussels. (Anna subsequently won the EIT Change Award and you can read full details here.) The accolade recognises top graduates from EIT-Labelled education programmes. Anna is a graduate of the EIT RawMaterials’s EMerald Masters programme in Georesources Engineering. 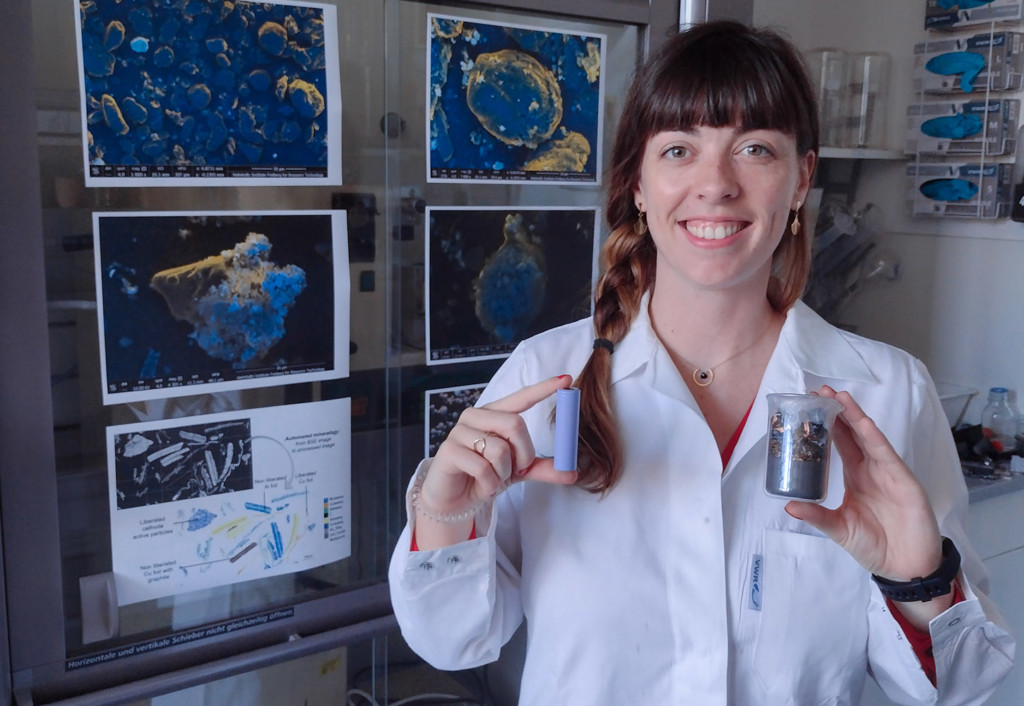 Why is it so Crucial to Recycle Graphite?

Lithium-ion batteries consist of many different valuable materials. As an example, an electric vehicle battery consists of around 6kg of lithium, 30kg of cobalt, and a huge 100kg of graphite. However, the existing technology for the recycling of lithium-ion batteries means that graphite is either burned off or ends up in landfill. So, recyclers, and European consumers, are losing out on this crucial ingredient for lithium-ion batteries. These batteries in turn power everything from smartphones to electric cars.

Anna’s solution will enable Europe to source some of the high-quality, anode graphite necessary for lithium-ion batteries within Europe – from old batteries! Her method can eliminate some of the current demand for graphite mining and the intensive purification process. Processes which are currently carried out in China. At the moment, to produce one tonne of anode graphite, between two and three tonnes of mined graphite is necessary. This comes with a hefty price tag: between $8,000 and $20,000 per tonne of graphite. And these processes also carry a hefty carbon emissions toll on the planet.

Anna’s method can reduce both the costs and the carbon footprint. This makes her a superhero for the recycling and raw materials industry, and for everyone working to make Europe climate neutral by 2050!

It means we could have our own supply of graphite in Europe by re-using this graphite from old batteries. Therefore, we can be less dependent on other countries. The graphite we need for powering batteries to enable the green and digital transition is not the same graphite in your pencil. It is of a really high purity. With our research partners, we have tested the recycled graphite recovered from my process and it behaves as well as commercialised graphite! It will never meet all the demand of course. But, we can go some way to meeting the demand.

While her process has not yet been applied in the industry, her research has been widely welcomed. Anna is currently working for the EIT RawMaterials supported start-up, Erzlabor GmbH, as a consultant for several battery recycling companies.

Recyclers in Europe are really positive about my method. They believe in closing the loop, they want to be more sustainable. By using my process, recyclers can recover two valuable products instead of one, the metals on one side and the graphite on the other. In addition, removing graphite from the metals enables a more efficient recovery of the metals and consumes less acids, therefore decreasing costs.

Anna’s process also has another added benefit for the recycling industry as they grapple with the upcoming new EU legislation on battery recycling. Under the current legislation, at least 50% of a battery’s weight must be recycled. From 2025 however, this requirement will increase to 65% for lithium-ion batteries and to 70% from 2030. By adopting Anna’s process, recyclers can easily reach the 70% battery recycling requirement.

Graphite usually represents 15%-25% of the battery’s weight.  So, by recovering the graphite on top of the 50% of metals recyclers are already recovering – recyclers can meet the new 70% requirement. 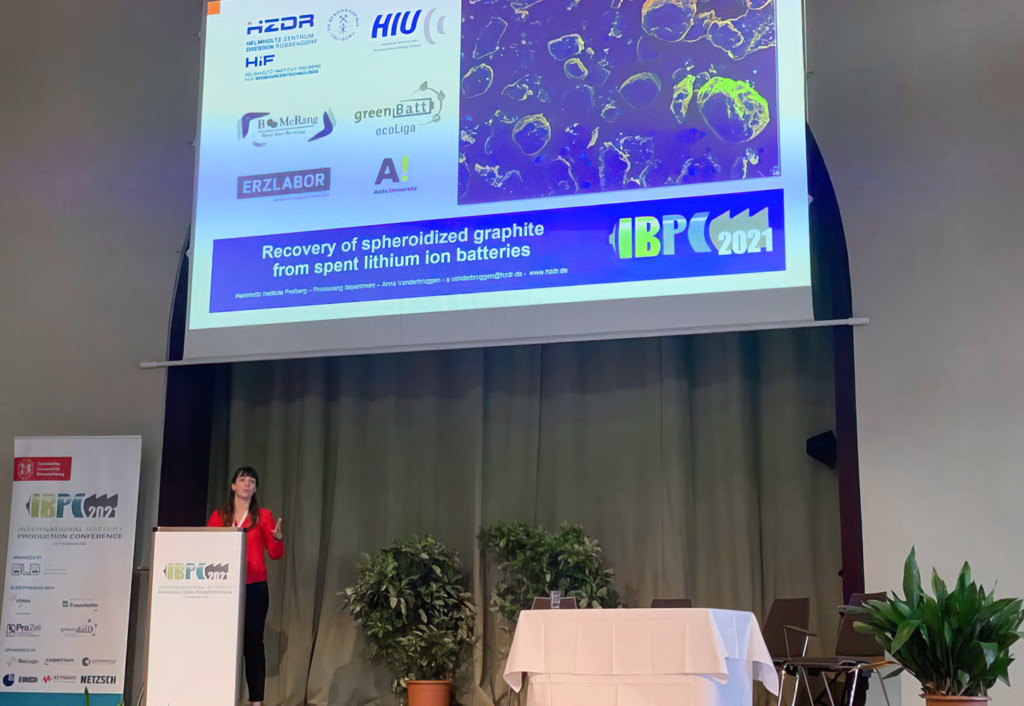 How Does Anna Recycle Graphite?

When Anna was first tasked with creating her Masters thesis topic, she took inspiration from the everyday items she found in her drawers; old mobile phones, laptops, and batteries. In short, the lithium-ion batteries that were powering everyday life in Europe.

Embarking on her research, she found that the current recycling battery practice in Europe focused on retrieving cobalt, lithium, and nickel. Anna realised that many tonnes of valuable graphite contained in old batteries were being destroyed. Europe, meanwhile, was continuing to import vast quantities of graphite from China. She was determined to change this situation for the benefit of European raw material autonomy and the climate.

This has led to Anna’s day-to-day work now, whereby she examines crushed battery powder in the research lab. She explains:

The obtained powder, called black mass, is a mixture of metals and graphite that we try to separate. However, it is quite challenging because this powder is really fine, as fine as grains of flour. We developed a technology for the black mass (which my team and I have nicknamed black mess!). You can imagine our technology like a jacuzzi. You put the black mass into water, mix it with some chemicals and the air bubble are selectively recovering the graphite. Graphite is hydrophobic, so it doesn’t like water. It attaches itself to the bubbles, and they rise to the surface and form a froth. From this froth, I can recover the graphite. The metals meanwhile do like water, so they are left at the bottom of the jacuzzi and can be recovered from there.

This explanation may sound simple, but Anna’s research has taken four years and involves painstaking and highly complex processes.

What’s Next for Anna and European Battery Recycling?

Although she has been approached by some of the biggest names in the battery industry, Anna wants to remain in her lab researching for now. And battery recyclers will rejoice to hear it. In 2030, they will have to meet a 70% lithium recycling requirement. So, Anna and her research team have set their sights on improving the lithium recovery process from old batteries. Thus, cementing Anna’s status as the (most humble) superhero of battery recycling.

Anna’s graphite recycling solution won the prestigious EIT Change award at the EIT Summit in Brussels on 11 October. You can read full details of her win below.