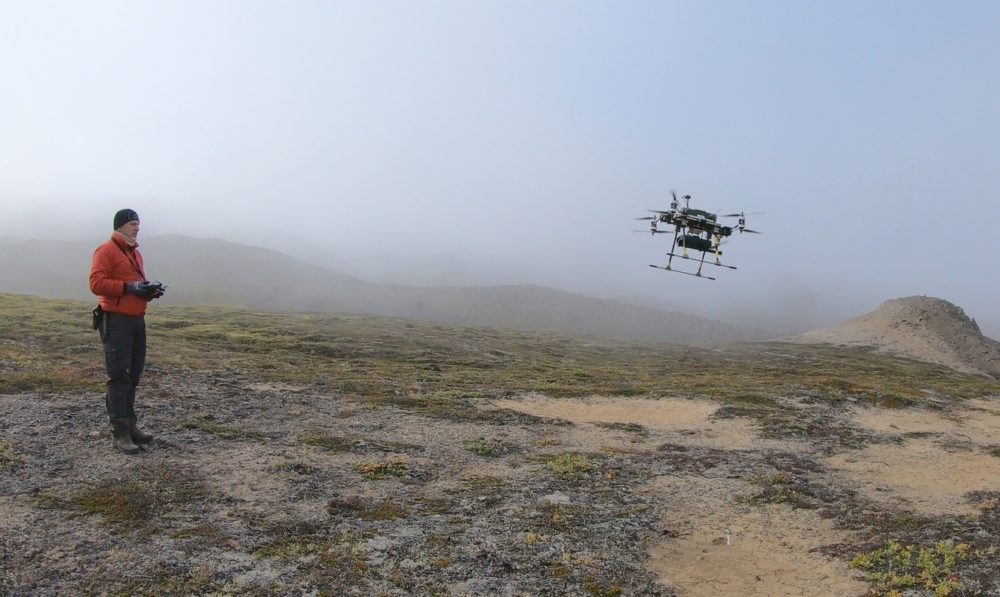 Over the last ten years, unmanned aerial vehicles (UAV), commonly called drones, and related systems have rapidly developed. Everyman’s drones are available on store shelves to take photos and videos of holidays, one’s own house and garden, and for many other private reasons. With the general advances in robotics and digitalisation, drones have also been increasingly utilised for various commercial applications.

This trend can additionally be seen in geosciences. A key question arising for many geoscience applications is whether drones could be used as platforms to carry out more demanding surveys with remote sensing and geophysical sensors that have traditionally been mounted on aircraft or have been carried by workers on the ground. The answer is yes; drones can be used, although the integration of such sensors on drones is not straightforward. In recent years, many groups all over the world – both in academia and industry – have worked on the integration of various sensor types on drones that are relevant for geological mapping and mineral exploration. Drone-borne survey systems are considered to be especially appropriate for small to medium-sized surveys that are smaller than those carried out with traditional aircraft, but larger than ground-based surveys. The goal of many companies is to offer drone-based services for this market niche.

One of these projects, in which novel drone-borne systems have been developed for mineral exploration, is the EIT RawMaterials funded upscaling project “Multi-Sensor Drones” (MULSEDRO). The MULSEDRO project started in spring 2017 and ran for over three years. The project was coordinated by the Geological Survey of Denmark and Greenland (GEUS). The other partners were Helmholtz Institute Freiberg for Resource Technology (HZDR-HIF, Germany), Radai Oy (Finland), DMT GmbH & Co. KG (Germany), the Geological Survey of Finland (GTK) and LTU Business AB (Sweden).

The goal of the project was to develop lightweight multi-sensor drone systems that are highly flexible and cost-effective in their data acquisition, whose operation is little restricted by regulations, and which can acquire magnetic and multi- and hyperspectral data particularly relevant for mineral exploration. These sensors were integrated on both multi-copters and fixed-wing drones. Multi-copters allow detailed surveys to be conducted with an exceptionally high resolution in a short time. In contrast, fixed-wing drones can survey larger areas of several square kilometres within a few hours.

We wanted to put the geoscientists back where they belong and allow them to be creative again. We expect our product to become a new best available technique (BAT) in the exploration sector but also in the monitoring of active and post mining activities. As this technology does not required physical strength nor extreme competences we expect a perfect gender balance.

The project team aimed to develop a rental service for industrial partners and exploration companies that do not wish to invest in the technology but require the benefits of this technology, secondly a UAV platform that can be purchased by customers. The use of UAV based sensors is firstly intended for exploration but can directly be implemented for mining activity monitoring and post-mining rehabilitation. It has, therefore, a clear impact on increasing resource and energy efficiency across the entire value chain.

The multi-copter system was developed by HZDR-HIF and allows survey operation with both a visible and a near infrared (VNIR) hyperspectral camera (Senops RIKOLA hyperspectral) and a three-component fluxgate magnetometer (SENSYS MagDrone R1) (see Fig. 1). The sensors can be easily interchanged within minutes thanks to a quick-release system. In this way, strategies for data acquisition can be adapted to meet the specific needs of the sensors. While magnetic surveying requires a constant speed, hyperspectral imaging favours a “stop – acquire data – go” strategy. Because different minerals, especially Fe alteration minerals and other hydrothermally altered minerals in certain ore deposits, have diagnostic spectral features, multi- and hyperspectral data can be used to detect zones associated with different types of mineralization systems.

The UAV based products allow better exploration targeting and focusing on key areas and thus increase their efficiency, reduce costs and energy, for example by decreasing the amount of drilling and by reducing the number of more expensive airborne and helicopter surveys. The new UAV platform and its sensors are typical prototypes that offer improved process productivity and reduced material and energy costs. Without doubt, this technology will lead to supporting people with ideas to create start-ups either by triggering new services or stimulating new ideas of sensors on UAVs. We will also contribute to boosting innovation in the EU and the raw materials sector by providing new tools and therefore, new paradigms. In recent years, geoscientists have been cut out of the exploration scheme to favour heavy drilling and geophysics campaigns.

The project partner Radai developed the multi-sensor fixed-wing system that can cover large areas in a short time (>25 km2 per day), its main role was acquiring data for semi-regional background maps of physical properties relevant for exploration. In contrast, the multi-copter (from the MULSEDRO project partner HZDR-HIF) was used for smaller surveys (< 1 km2) getting datasets with particularly high resolution.

The combination of magnetic and multispectral sensors on the same small fixed-wing drone is a unique drone survey solution and offers various options for advanced data integration. The final product is two drone systems equipped with photogrammetry magnetic, and hyperspectral (HS) sensors – the two latter to be used optionally ready to the market.

Radai’s drone system is presumably the only lightweight fixed-wing system that can gather simultaneously high-resolution multispectral and magnetic data, which integration is highly relevant to characterise mineral potentials of exploration areas. Its automated operation is fast, inexpensive, and versatile and adapted to mountainous environments. The flight endurance of the customised fixed-wing drone is exceptionally high (~2 hours), allowing extensive surveys conducted in a short time. Telemetry links and advanced datalogger technology allow real-time monitoring of the survey operation and the data transfer. 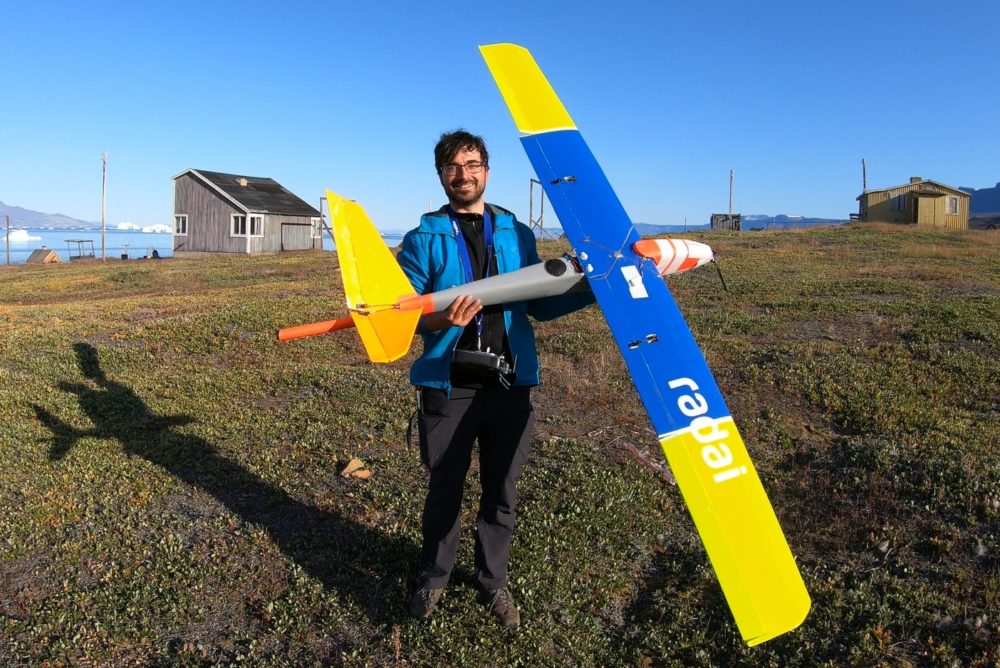 Figure 2. Radai Oy’s fixed-wing drone equipped with a fluxgate magnetometer (orange cylinder) in the tail boom. Robert Jackisch (HZDR-HIF) is holding the drone. The photo is from a field campaign in Greenland in 2019 (Photo: Heikki Salmirinne, GTK).

Developments of the MULSEDRO project have also had an impact on the establishment of the new spin-off company TheiaX from HZDR-HIF. TheiaX will start their business in 2021, and one of their activities will be multi-sensor drone services. In contrast to Radai Ltd, their focus will be very high-resolution surveys on smaller targets areas with multi-copters.

MULSEDRO’s drone systems were tested under real conditions in the mining areas of Otanmäki and Siilinjärvi, Finland, in 2018 and for mining exploration on Disko Island, Greenland, in 2019. The surveys in Otanmäki have been reported, and the results are available in more detail in the publications listed below. The results of the field campaign in Greenland will be published in the near future. An example of a 3D model of integrated and interpreted data acquired by the MULSEDRO systems in Siilinjärvi can be seen in Figure 3.

The development made in the MULSEDRO project has had a major impact on our business. Today, our drone system is presumably the only light-weight fixed-wing system that can gather simultaneously high-resolution multi-spectral and magnetic data. This data is highly relevant when characterising mineral potentials of exploration areas. 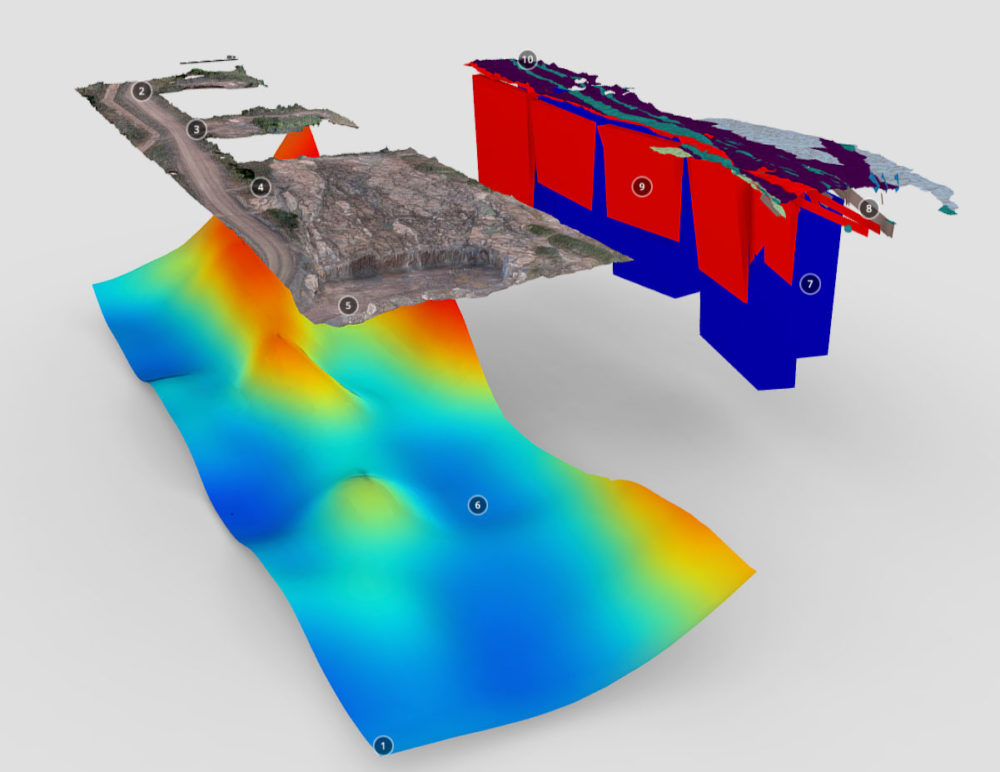 Figure 3. 3D visualisation of an integrated geological and geophysical model of a carbonatite-hosting outcrop in Siilinjärvi, Finland. The left model (1–6) shows a digital elevation model as an RGB mesh and the interpolated colour surface of the total magnetic field below it. The right model (7–10) shows integrated data layers of image classification, structural planes and modelled tabular subsurface bodies from the same area as the left model. (Image: Robert Jackisch, HZDR. A more detailed description is available at https://skfb.ly/6U6Xo).

The project provides a non-invasive exploration alternative and thus allows to reduce environmental impact, but as a monitoring tool for (post-) mining activities, it also allows better control on the environmental footprint. Public acceptance for exploration and mining activities is largely dominated by environmental issues. By providing a method that reduces the footprint of mining activities while enabling a more efficient survey, we open the door to renewed exploration in Europe and thus contribute to the security of supply of materials in Europe. Finally, by developing new technology with industrial partners, we strengthen the competitiveness of industries across Europe and increase employment and growth.

Noise disturbances are low, and the areas that can be surveyed with drones without causing any environmental harm is comparable with small conventional helicopter-borne surveys. In addition, drone surveys can be acquired at shallower altitudes and provide information in very high resolution.

Because of the low pricing and the relative low skills required to fly a drone, it is attractive and also possible for local communities and small companies to carry out these exploration activities themselves. This can lead to an increase in geophysical surveying for mineral exploration in general and is particularly true for developing countries, where locals can take over surveying on their own and, hence, increase their independence.